The following article about the restoration of The Woolworth Building was written by John Krouse, CEO of Boston Valley terra Cotta, for the Fall 2018 issue of Applicator magazine by SWRInstitute.

Together, Boston Valley and FacadeMD established a process that set the standard for future restoration projects. With advancements in digital scanning technology and engineering software, the two were able to ensure accuracy throughout the restoration.

The Woolworth Building was designed by Cass Gilbert and completed in 1912. The building is 54 stories and reaches a height of 792 feet, making it the tallest skyscraper of its time. The first three floors of the building were constructed of limestone and the remaining 51 stories used terra cotta as a lighter, more efficient alternative to the stonework.

The original terra cotta façade was sculpted and manufactured by the Atlantic Terra Cotta Company, featuring five different shades of off-white glaze with additional polychrome elements for a total of twelve colors. Terra cotta units were hung on a steel frame structure, which later proved to be an issue leading to the deterioration of the façade. 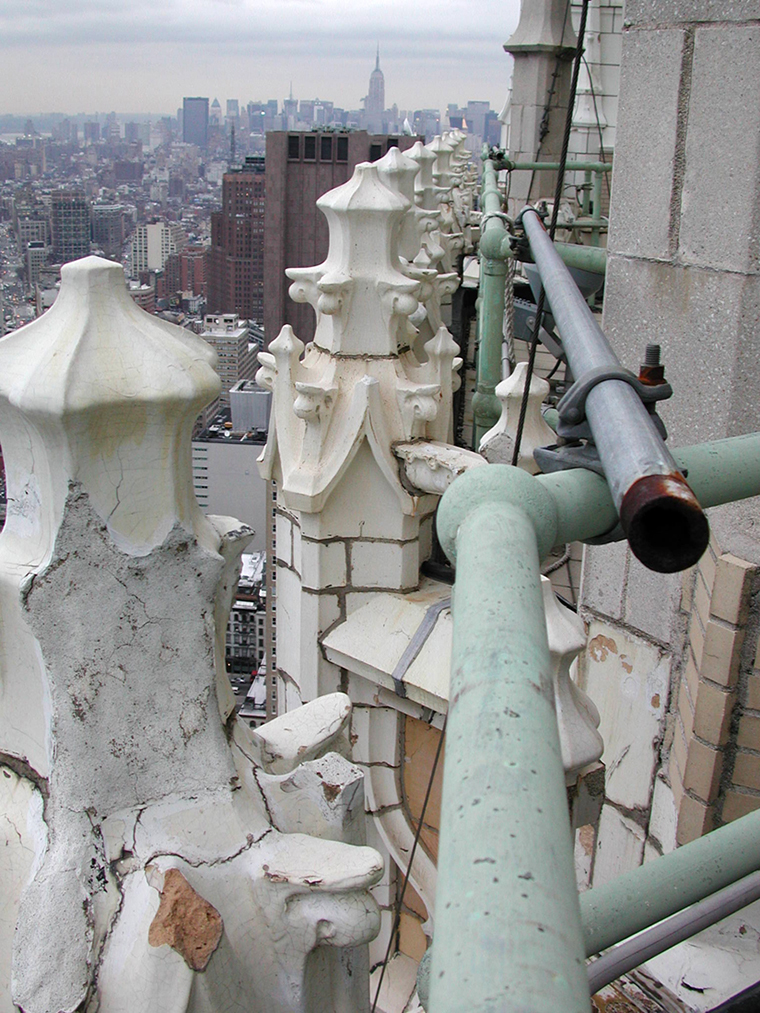 Onsite conditions of The Woolworth Building before the restoration was complete.

Historically, terra cotta is known as a 100-year material; it will typically last generations with minimal maintenance and repair. However, with proper construction, terra cotta architecture has the capacity to last much longer.

Terra cotta buildings constructed in continental/micro-thermal climates such as New York City are exposed to a wide range of elements from all four seasons. The building continually undergoes cycles of freeze/thaw conditions due to varying temperatures. To ensure the longevity of the terra cotta, the buildings must be designed for proper drainage and must be able to handle thermal movement and wind loads of the area.

The terra cotta on the Woolworth Building was hung from a metal frame with soft iron fixings and anchor straps. The original construction did not provide adequate expansion joints or proper relieving angles to handle the movement. Without flashing or proper weeping, anchoring is subject to oxidation and rust. Additionally, these conditions were exacerbated by the design — the building was compressively loaded with masonry infill between the terra cotta and steel.

Due to previous construction methods, damage to the facade was apparent within a few years of building completion. The original structure was not designed to handle the elements of wind and rain, and didn’t accommodate for the different thermal expansion rates between the metal and terra cotta. Over time, the anchors rusted, creating oxide jacking, resulting in damage to the terra cotta facade.

Environmental factors and additional restoration attempts further aggravated the damaged building. The effects of smog and pollution could be erased with careful cleaning, but the building showed significant damage to the terra cotta at all levels, including balconies and buttresses due to the structural design. Earlier attempts to repair the Woolworth Building used reinforced concrete, however this solution did not last, causing subsequent damage to the terra cotta.

With FacadeMD, Boston Valley determined a strategy for the restoration of the Woolworth Building, simplifying both the bid and cataloging process. In order to document the building and accurately estimate the scope of the project, the restoration architect and manufacturer established five prices for work based on the complexity of the terra cotta stones: low, medium, high, ornate, and sculptural. This system simplified the cataloging and cost structure and made additions and deductions easier to calculate. To help approximate the overall tonal quality of the façade, three white glazes were selected and applied randomly; fewer glazes offered a range of colors comparable to the original treatment of the terra cotta within the estimated budget.

A thorough site survey was conducted, consisting of gathering detailed measurements and documentation of the existing conditions. Traditionally, samples are required of each unique piece to ensure they can be accurately recreated in a mold. Due to safety concerns and to avoid disrupting the existing façade, many units of the Woolworth Building were documented without receiving actual physical samples. 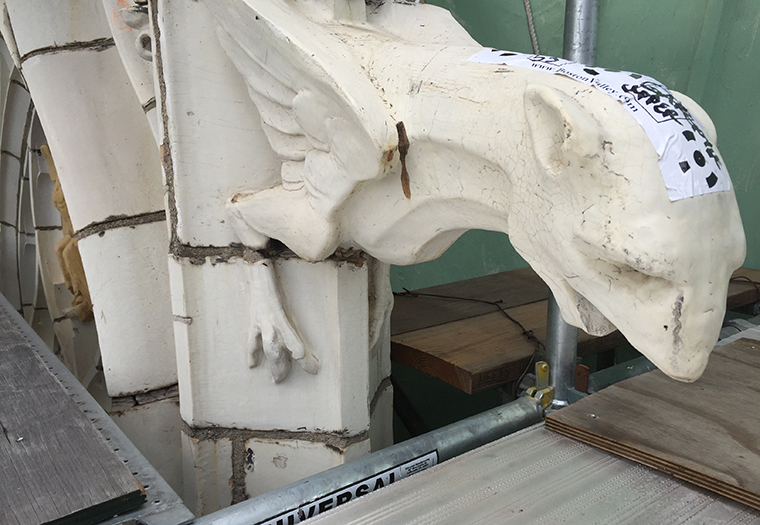 A gargoyle on The Woolworth Building slated for reproduction. 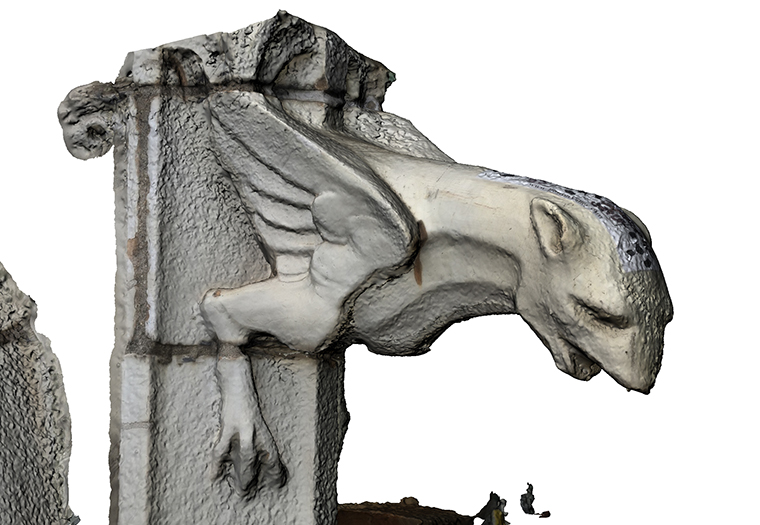 The digital model of the gargoyle, the image is created through advanced photo and scanning technology.

Boston Valley set up an on-site office on the 43rd floor to make communication open and immediate. All data acquired in the cataloging phase was sent directly to this office and processed there for immediate reporting. FacadeMD performed their drops on the façade, inspecting each block and marking those requiring replacement with an “R”. The Boston Valley team would follow suit, documenting each unit slated for reproduction.

The site survey was carried out over a three-month period. The efficiency of this process can be attributed to the assistance of digital technology and the team’s communication on site. 2-men drop teams on a swing stage surveyed the existing conditions, relaying the data to the Boston Valley employee, who gathered and reviewed the data to be meshed into digital models of each terra cotta block. Stones were identified and prioritized by the most critical pieces requiring reproduction. Costs were estimated for each unit, based on their rank in one of the five pricing criteria established, resulting in a more accurate bid scope that stayed within the developer’s budget.

The cataloging process used Bluebeam software for estimating and calculations. The job was initially estimated for 175 molds and 4600 reproduction units to be made, but the site survey revealed a necessary mold count that reached over 400 with 3400 replacement units needed. Site surveying was conducted with the assistance of photogrammetry, a method of photographing and digitally scanning an object to identify surface points that can be mapped into a scalable digital model. Boston Valley used this technology to document and catalog each piece identified for reproduction. Multiple photographs were taken of each stone from many angles, creating points of reference for the digital model. 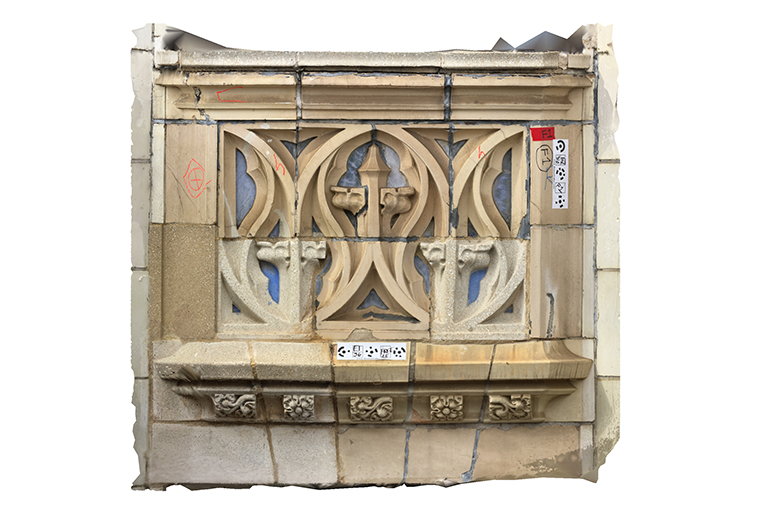 A digital model of a part of The Woolworth Building, several blocks in this group were replaced.

Graphic scale stickers were placed on each unit, establishing specific points for calculating the size and form of the block based on the set of images.

During the manufacturing phase, multiple scans of the blocks were imported into proprietary software and digitally meshed together, to create a 3-dimensional view of each unit. Physical samples were digitally scanned and meshed — these samples were helpful to verify bed depth and to speed up the drawing phase. Some one-off pieces were not available as samples, requiring Boston Valley to use documentation and modeling software to create an accurate model of the unit. In this case, physical samples were additionally valuable for their comparison and continuity. Through the scalable accuracy of the scans, some pieces, such as the heavily deteriorated spandrels, were mathematically recreated from their remaining fragments. Each unit was digitally modeled with exact tolerances to accurately fit together with a ¼” mortar joint in between each block. Composite elevation drawings illustrated the number of replicated units fitting with stones of the existing façade.

In production, the digital meshes were imported into Rhino software and sent to a CNC cutting machine to create a physical model of each block. The units are rendered to the exact points of the digital model with a very high degree of accuracy. In a method much faster than hand sculpting, models are routed out of Styrofoam on a CNC 5-axis router. A plaster mold is then cast from the foam positive. Boston Valley used a core-cast method of casting the terra cotta, filling each mold with liquid slip and allowing to a 1 – 1 ¼” wall thickness to form. 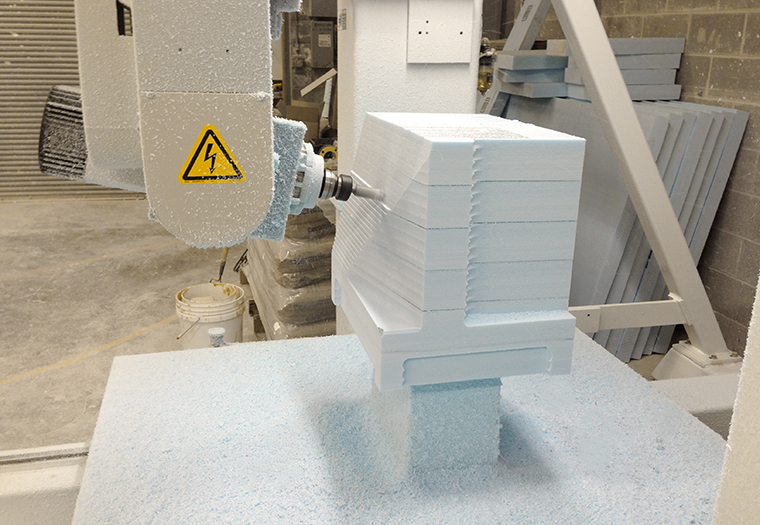 The CNC 5-axis router uses digital files to cut foam replicas. They will be used to create plaster molds. 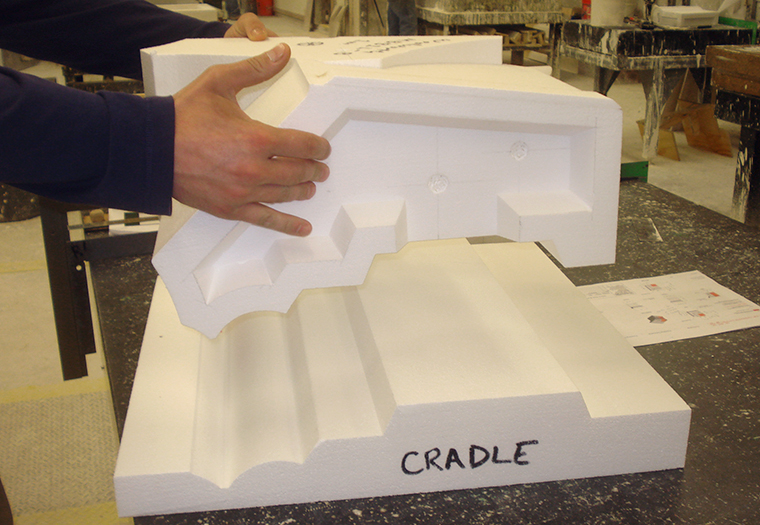 Slip casting is a quicker and more efficient method for casting ornate and decorative terra cotta pieces, requiring less hand finishing after the unit is released from the mold. Each terra cotta stone requires 1 hour to press by hand, while slip casting terra cotta molds need only 10 minutes to fill. The original Woolworth stones were cast in two parts and joined at the seams. Because of the narrow space between the two halves, the original blocks may have failed because the fabricators were not able to get their hands inside each unit to properly seam the piece.

The recent advancements in digital scanning technology and engineering software have undoubtedly changed what is possible for architectural manufacturing and construction. Through the scope of the Woolworth Building restoration, Boston Valley Terra Cotta and Façade Maintenance Design were able to establish a timeline, budget, and strategy, allowing for a smooth restoration process. 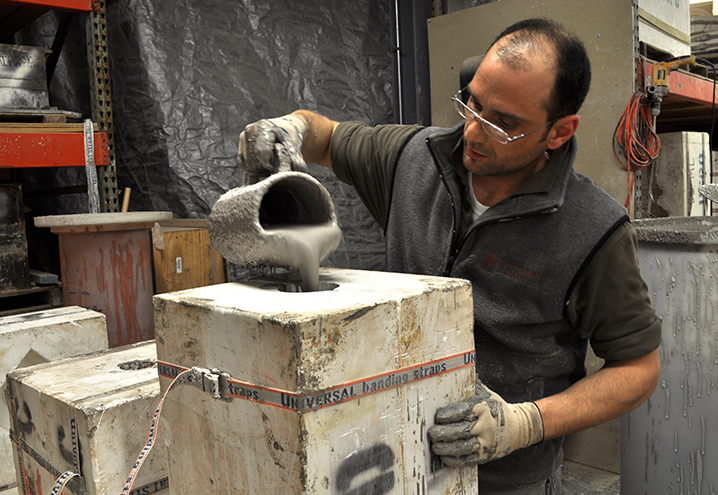 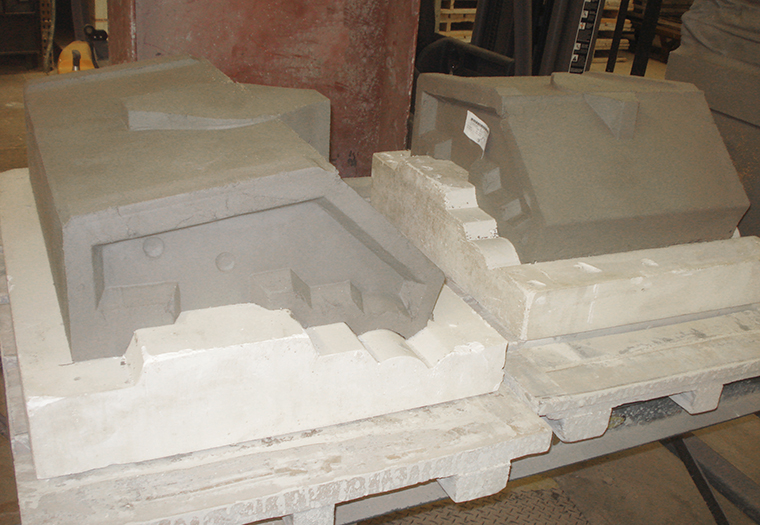 The masonryis revealed  after part of the mold has been removed.

The following factors were essential to guarantee successful production with digital technology.

Communication: The restoration architect, the masonry contractor, and the terra cotta manufacturer established a dialogue prior to site survey. The transfer of information was open and immediate. Since the documentation process was streamlined to the factory, Boston Valley was able to receive approvals from FacadeMD to be released in sequence of the drop. Overlapping the CNC machining and production of the units with the site survey phase expedited the entire construction process to 16 months.

Strategy: A simplified system for cataloging the site and the scope of work created a flexible framework to maintain budget expectations. Estimating software kept real-time cost projections of the project, and easily shared notes allowed the team to adjust the scope to the needs of the façade. Information transmitted and shared with the entire team provided real-time data including the number of units needed to be removed: 3400, the number of molds required: 424, and the number of drawings necessary: 430.

Accuracy: Photogrammetry gave a more accurate depiction of the project scope and provided better information about each individual unit to be replicated. The established system for documentation, combined with the accuracy of the photogrammetry software eliminated the need to return for additional dimensions.

Tracking: Digital software documented and confirmed the location of each terra cotta piece. Boston Valley was able to compare data of the units to be reproduced and scheduled shipping for installation in the order of the drop.

The proof of these methods and technology is in a better product that comes within budget with fewer errors and minimal waste. With the assistance of digital technology, Boston Valley Terra Cotta and Façade Maintenance Design were able to catalog and estimate the project scope efficiently and accurately. Reproduction pieces were manufactured, shipped to the site and replaced with only three terra cotta units left over. Restoration workers at the Woolworth Building were able to chip out the existing material, place new anchoring and replace the replicated terra cotta units without modification to the masonry, giving new life to this landmark building. 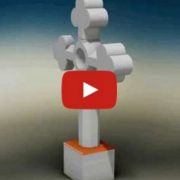 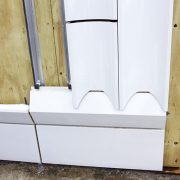 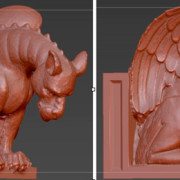 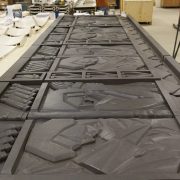