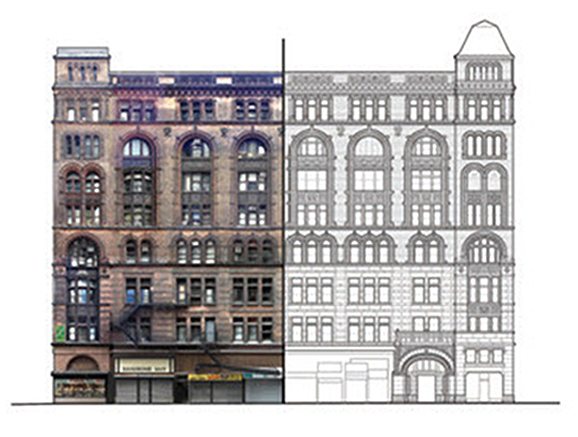 To make way for the new Fulton Center pavilion, the Corbin Building was initially scheduled for demolition along with others occupying the west end of the block between John Street and Fulton Street, and Arup sub-contracted the historic preservation specialists Page Ayres Cowley Architects (PACA) to research and document the building before it was demolished. Due to its age, drawings had to be produced for the Historic American Buildings Survey (HABS), a national repository documenting the history of construction in the US, so PACA supplemented its document research with photogrammetry of the building façade to produce highly detailed drawings of the architectural elements (Fig 7).


PACA’s investigations revealed what years of neglect had masked: here was a highly ornamented architectural gem of historic significance.
One outstanding feature was the extravagantly decorative staircase, formed using slate cantilever steps with ornamental balustrading in brass and copper-plated cast iron, a mass of intricate relief and detail (Figs 8, 11). Also resonating with the proposed redevelopment were the building’s connection to the history of mass transit through the original owner, builder, and later conversion; the HABS survey identified that it had one of the earliest Otis passenger elevators. 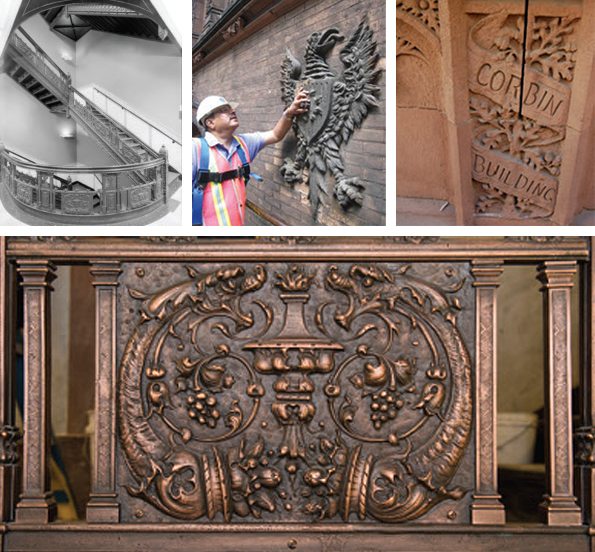 As a result, late in 2003 the Corbin Building was added to the National Register of Historic Places, and momentum grew through both public and government opinion that it should be saved. The Fulton Center design would be revised, and this was formalised in a MoU (Memorandum of Understanding) between the MTA, the State Historic Preservation Office (SHPO), and the Federal Transit Authority, which provided overall funding for the project to save and incorporate the Corbin Building into the new Fulton Center.

With a hybrid structure of load-bearing masonry and an ironwork gravity frame, Corbin is wedge-shaped on plan, 40ft (12.2m) wide at the east end but only 20ft (6.1m) wide at the west elevation overlooking Broadway. Its overall length is 152ft (46.3m), and it has two basement levels, double-height retail space at street level, and seven full levels of office space above. The building ends were once crowned with “fairytale towers” but lost their peaked roofs in the early 20th century.

The façade is predominantly self-supporting masonry. Cast iron columns were used internally and are also embedded within the perimeter masonry walls as support for the internal floors and roof. Wrought iron beams frame between the columns and perimeter
walls and support the Guastavino tile arch floors. The large projecting bay windows in the south and west façades were formed as self-supporting decorative cast iron structures. For all lateral stability the building relies on the masonry elements acting as shear walls.

While the exterior was found to be more or less intact (albeit suffering from its long neglect), the building interiors had been extensively redecorated and remodelled. But the grand ornate staircase still connected levels 2 through 8, and some elements of the original Otis elevator remained. 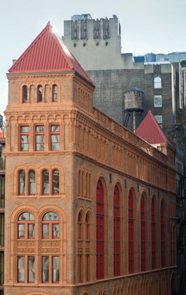 Although a limited restoration of the façade would have met the obligations the MoU imposed on the MTA, the client and design team agreed on a more ambitious plan, benefiting both the new and the existing buildings, to integrate Corbin and the Fulton Center pavilion into a single coherent design that allowed each part to support and rely on the other. Key design decisions were to:

• use part of Corbin’s street level space as the main south entrance to the Fulton Center, so that the public would access the
building through the central arches on the existing façade below a new steelwork canopy into an escalator lobby, and pass through a large new opening in the north wall to the Fulton Center beyond.

• install a new deep escalator, running from the Corbin south entrance lobby through its existing basement and sub-basement levels to connect with a new concourse under the IRT Lexington line on Broadway. This concourse (effectively a below-ground promenade) would access the PATH station over a block away and allow passengers to cross the existing subway line without having to return to street level.

• locate egress stairs for both Corbin and Fulton Center in a unified space between them, an “interstitial building” that would
require new penetrations in the north wall of the former at every level above ground, but enable removal of the typical intrusive and ugly NYC external iron escape stairs from the façade. This would also allow the historic ornamental stair in Corbin — not compliant with modern codes due to the height of the existing decorative handrails — to be kept unaltered.

• share MEP systems between Corbin and Fulton Center, with basement and subbasement spaces in Corbin for incoming electrical vaults, a PRV station for the steam heating system, an escalator motor, and control room. Multiple services would pass through, including generator fuel piping and storm and sanitary drainage, and there would be a shared fire command center at street level between the two buildings.

• strengthen Corbin’s lateral system by a connection to the new Fulton Center steel frame. As this could only be efficiently achieved at the pavilion’s lower levels, due to floor diaphragms becoming discontinuous above level 3, this would also necessitate lateral stiffening to Corbin above the roof connection level.

• replace the existing parapet structure with a reinforced masonry backing wall tied to the roof. As the parapet is Corbin’s most vulnerable element in a seismic event, and had undergone significant weathering due to its exposed location, it was decided to rebuild the wall, improving its ability to cantilever (rather than just rely on its own mass).

• reconstruct the fairytale pointed roofs to the two towers that bookend the roof level. Code and safety concerns required a “modern construction” framed with pyramidal steel members and ring beams to minimize vertical load and outward thrusts on the existing masonry.

• expose the underside of the terra cotta tile arch ceilings previously hidden behind modern suspended ceilings, so that users could experience the spaces as originally intended. This would necessitate burying all electrical power, lighting, and IT conduits within the building slabs.

• retain the existing elevator shafts, and renovate/upgrade the elevator and cabs to a period design with minimal impact to the existing. Parts of the original Otis elevator cage were found during construction and incorporated in the lobby design.

• relocate and consolidate historic features, including the marble wainscot throughout to level 7; replicate the historic floor plate/internal corridor; repair in situ the historic wood partition office on level 7; display the decorative terra cotta from the parapet and the existing cast iron boiler doors in the escalator well way; display the historic Otis elevator cage in the entrance lobby. Arup submitted all details for the work to the SHPO for its review and sign-off, as the building had previously been designated as Landmarked.

Coming up next: The Corbin Building, Fulton Center: Rediscovering and Renewing An Architectural Gem – Part 3 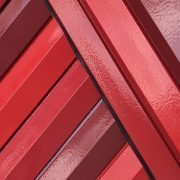 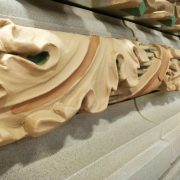 Big and Beautiful – Terra Cotta Blocks Made for Northeastern University 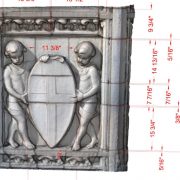 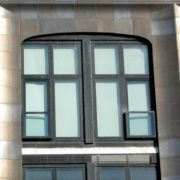 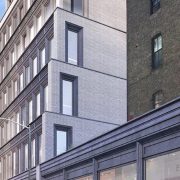 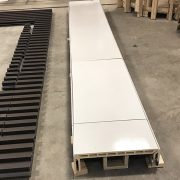 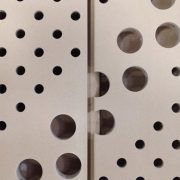 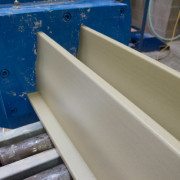