This blog is part two of a three part profile on Boston Valley Terra Cotta Research and Development Specialist, Andy Brayman. In this blog we discuss the ACAWorkshop and what it is like working with architects.

Andy Brayman has been involved in the ACAWorkshop since its inaugural year in 2016 but was brought into the fold as an organizer in 2019. Andy’s job is to help produce prototypes in preparation for the final event. Though the intensity of the work on the projects goes up tremendously, he says it’s fulfilling to be involved in all the groups at the same time because their goals are often very different.

Many architects who participate in the workshop are interested in pushing traditional ceramic production into new territory. This interest drives them to bring out the different facets of architectural terra cotta that they want to experiment with. As an organizer, part of Andy’s responsibility is to help translate the architects’ visions into terra cotta. Each team has their own level of familiarity with ceramics and their own way of communicating their design intentions. Through the initial conversations with participants, Andy learns what they’re interested in and then tries to expand their concepts and see how each one can be made workable with the material.

“Some participants are very sophisticated right off the bat in terms of how they’ve been working with ceramics and designing with it for years and some people are new to the material. So there’s obviously a different role that is played depending on where they are and what they are learning.” 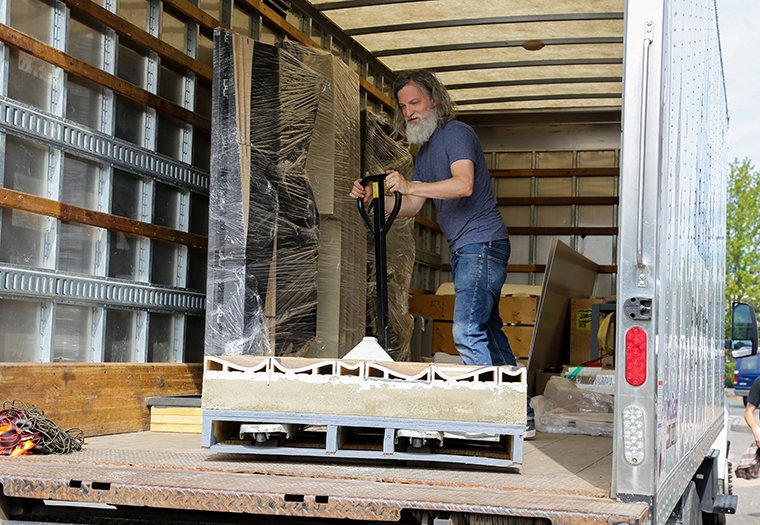 Ceramics is best known for its ability to transform into any shape with many surfaces to choose from. Depending on each team’s goals, Andy helps educate participating designers about how terra cotta can be manufactured, providing guidance to select the option that works for them.

When it comes to developing glazes and choosing glazes, that’s sometimes the guiding thought and that is not a narrow area still. It’s a huge area. Glazes that really read as ceramic can be wildly divergent, aesthetically, but it is a way of narrowing in on things.”

Defining the characteristics of a glaze:

As the visual effects of ceramic glazes can be varied and diverse, Boston Valley needed to focus in on what result the architect is looking for. This led Andy to develop a taxonomy of glaze characteristics, in which he studied glazes and started to break down and classify their qualities to give architects a vocabulary to express the way they want their project to look.

“That was a really interesting exercise for myself, to step back, classify things and break it down with the intention of it being a teaching tool. And by doing that, you begin to pick out different characteristics like pooling, breaking or crystal development on the surface of glazes. Phenomenons like rivuleting and really trying to put words and images to these traits to make it easier and quicker for architects to zero in on what they’re interested in.” 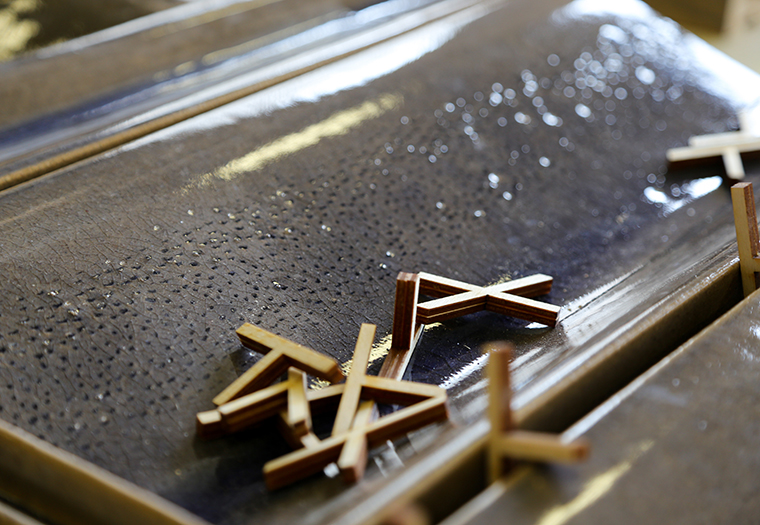 A close-up of the glaze used on team KPF’s prototype at the 2019 ACAWorkshop.

Considering surfaces while developing the form:

Returning to the idea that form follows function, it is the ideal that the glaze of the prototype should be considered throughout development:

“A good analogy is the beginning ceramic student who is learning to throw on the potter’s wheel. The first hurdle is just making the object and then the glaze comes second. Later on, there’s this sort of obstacle when you’re trying to pick the right glaze for the right form. And for potters and artists as they work longer in ceramics, they’re thinking of the glaze as they’re developing the form, often times. And those things are linked together, and they sort of help each other, they work together.”

In regards to architectural scale ceramics, the thought is that the glaze helps accentuate the details of the form. This can mean anything from the glaze breaking on the edge to really display its surface texture, to the color of the glaze reflecting light in a particular way or shadow that is interesting and peculiar. What makes architectural ceramics so different from the beginner’s pottery class is the scale; all these phenomena created by the glaze are happening from both close up and from two blocks away.

Click here to read part 1 of the Andy Brayman interview. 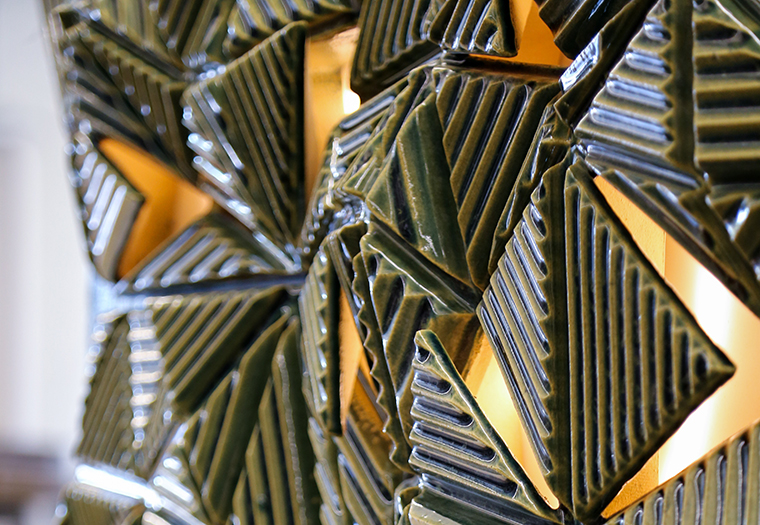 A close-up shot of team Payette’s prototype at the 2019 ACAWorkshop, showing the way the glaze sits on the ridged edges of the forms.

Read the other installments of this three-part profile:

In Conversation with Andy Brayman Part 3: sustainability & innovation in...
Scroll to top