This is part one of a three part profile on Boston Valley Terra Cotta Research and Development Specialist, Andy Brayman. In the interview we discuss his work developing glazes for Boston Valley, helping to create prototypes for ACAW, and his thoughts on the future of ceramics.

In 2019, Andy Brayman was brought onto the Boston Valley team to run an offsite glaze lab at The Matter Factory. His work as Research and Development Specialist can be broken down into two general areas: specialty glaze development and production and prototyping for the ACAWorkshop. His background in ceramics started when he took his first ceramics class almost 30 years ago — he went on to earn a MFA in Ceramics from Alfred University and has been working in the field ever since. When asked how the perspective of an artist can aid in the production of architectural products he went on to say the following:

“I’ve noticed about most artists who work in ceramics, you have to be a specialist and a generalist. Ceramics as a process is really complicated, so to succeed in it you have to be knowledgeable in a lot of different parts of the process.”

The Matter Factory was founded in 2005 as a way to work and collaborate with other people. The facility located in Kansas city focuses on research and experimentation in ceramics. Since its inception, Brayman has been building his facilities to become an experimental factory primarily doing small batch production. Though the Matter Factory’s setup is designed for a smaller scale, their operation allows it to be nimble and adaptable to scale small batches into a full, architectural scale for production. The partnership with Boston Valley has further built upon the notion of scale, requiring Brayman to work and consider the reality of ceramics at a much larger scale. 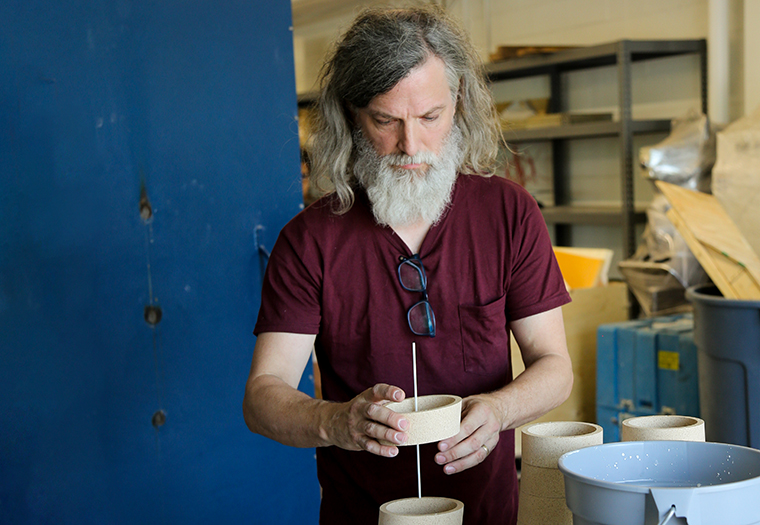 Though Boston Valley and The Matter Factory are quite different, they share some particular qualities regarding their history and methods of production. Their processes are rooted in hand crafting and making things in a low-tech way but both have had to transition into a digital toolset, integrating and developing new tools for production. Both facilities share a similar workflow, starting in a digital space, creating physical samples and prototypes efficiently to get feedback. In the year and a half since Andy started working with Boston Valley he has learned a lot from the existing R&D wing. Some of the knowledge is specific to how the plant operates, but he attributes so much of the embedded knowledge and information at Boston Valley to the people who work there.

“I love going there and just learning. It’s one of the best things that I’ve gotten out of this is just how much I’ve been able to learn. The way they solve problems and the processes that they’ve developed in house, some of it is sort of the secret sauce … and some of it is just the people who work there of course.”

To develop new surface treatments, Andy casts a wide net before narrowing in on glazes that haven’t been developed yet. At the beginning of the process, he considers the conditions Boston Valley creates for their firing cycles to create strong, robust work for architectural scale. Comprehensive experiments are conducted to understand how glazes melt in their conditions. That information is fed back into software to visualize the recipes and formulas and shows chemical compositions in a 3-dimensional space using the same tools architects use for design.

Creating new glazes requires a lot of precision but letting go of control is also important. So much of ceramics is more complicated than people understand and changing one material slightly can change a glaze entirely. There’s an endless number of possibilities that exist, so you have to keep an eye out for unusual things. This involves a lot of documentation using the digital toolset that Andy embraces in his work. Data visualization is a key to the development of new recipes; these tools are utilized to better understand large amounts of data with visuals that cannot typically be understood only with text.

“…there’s always the possibility of discovering things that haven’t been seen before. And that’s a huge part of what I like about glaze development, you can really explore territory that’s new and I love that part of it.”

Featured image: Sample tiles of specialty glazes that are currently in development with Andy and Boston Valley.

Read the second & third installments of this three-part profile: 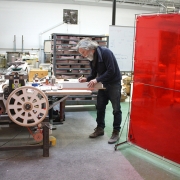 In Conversation with Andy Brayman Part 3: sustainability & innovation in ceramics 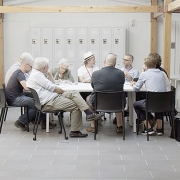 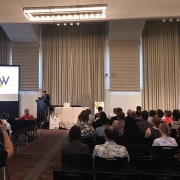 Introduction to Our 2019 ACAWorkshop Organizers & Speakers