SOURCE: WordPress Blog
BY: Amy Smith
DATE: October 16, 2011
See the original article at Boston Valley Terra Cotta Blog Post by Amy Smith
Boston Valley Terra Cotta is one of only 2 major manufacturers of architectural terra cotta remaining in the USA. Despite its more recent entry into the market, Boston Valley has proven it is a company not to be underestimated. Boston Valley Terra Cotta was established by the Krouse family in 1981 following the purchase of Boston Valley Pottery, a company which had been in existence since 1889. Originally a brick manufacturing facility and later a clay flower pot manufacturer, Boston Valley Pottery was converted to an architectural terracotta facility by the Krouses. The company’s first project was producing terra cotta for Sullivan’s spectacular Guaranty Building in Buffalo, NY.Since that confident beginning, BVTC has grown and continues to invest and innovate; supplying terracotta to a worldwide market.The scale of the facility is what I was struck with as I was guided through the extensive facility. BVTC utilises 4 methods of producing terracotta: -hand pressing -ram pressing -slip casting -extrusionHere is a run through of the processes from beginning to end for those who are less technically versed:Drafting Room: There is space for more than a dozen draftsmen. Typically a project begins with a site survey performed by a drafting project manager. Samples of each unit type are tagged and documented.Mould making: Models and moulds are made in plaster. The model and mould shop works as a team with the drafting department to reproduce the units for replacement oversized. A mould of each model is made for the hand pressing department.Clay: BVTC batches the clay for each project from the raw ingredients delivered to the facility. The clay recipe is project specific and the proper ingredients are added to the mix by an automated machine. BVTC has recently started using porcelain from the china industry to grind down and use in the production of their clays. This is both environmentally sound and more economical.Pressing and Finishing: In this large room the clay pieces are pressed by hand. They are left to begin drying for a time to enable each unit to be released from the mould. Each block is tagged with a barcode as well as by an identification number being stamped into the clay. Each block is checked off the pressing list and highlighted on the drawing when complete. Once the block is released from the mould, finishers can begin working to add the details that cannot be included in the plaster mould. The finishers work from the drawings and samples by hand to ensure the correct marks and degree of finish are applied.

Ram Pressing: This production method involves a positive and negative space of the unit to be produced. The clay is pressed between the mould pneumatically and air forced through the mould releases the piece. Ram pressing is typically used for smaller pieces that are required in higher quantities.

Slip Casting: Slip casting is less often used although has been found to be very successful for making balustrades.

Extruding: I had not seen this process so what suitably impressed is the fine amount of detail and size of blocks that can be extruded. My artist’s eye enjoyed the structural pattern of the cross sections and how the light caught the extruded length of dull reflective wet clay. Occasionally the client will specify the pieces to be hand pressed, as they would have been traditionally when extrusion technology was not available to the industry. If extrusion can be used though it is preferred for units where it is an option as it is usually a more cost effective production method. Special extruding machinery is used for the TerraClad™ rain screen panels.

Glazing: Knowing what precise and yet unpredictable beasts glazes are I bow down to the people who work in the research and development lab here, clearly working with more patience than I have! Where a particular colour and finish are required this is where the recipe and application is worked out and tested (to exhaustion) until the chosen samples are signed off by the client.

Drying: Large dryers (from Stoke-on-Trent) that are temperature and humidity controlled slowly warm the terra cotta blocks to drive off the moisture before firing.

Sizing room: I was surprised to see almost all of the blocks, even those hand pressed, have the mortar sides machine cut after firing to allow them to fit precisely back into their assigned space on the building based on dimensions provided on the drawings.

Layout room Each elevation is laid out horizontally on the floor to check the fit prior to packaging.

Packing: Blocks are packed according to their priority phasing and sent to the site for installation.

I appreciate the time and freedom with which I have been given access to at BostonValley. John Krouse, Sheri Carter and Patricia Aubrecht were all very generous with their time. I particularly enjoyed John’s tour of the yard where overrun of material is stored, where the impressive nature of the breadth of buildings BVTC has worked with and the sheer number of projects is clear to see.

In looking more closely at the historic and new masonry, it was interesting to see some of the conditions in the original units from a building that may have lead to their failure and need for replacement. For example; backfilling the unit solid during installation is sometimes a cause of failure as the different expansion rates of the mortar/grout versus the terracotta can cause cracks and spalling.

I am also interested to see the sculptural forms that are being produced using the TerraClad™ system. I am interested in what the future may hold for terra cotta TerraClad™ struck me as an interesting bridge between three-dimensional decorative surfaces (as is possible with terracotta) yet still sits within our contemporary architects love of cladding and modular, rigid, building materials.

While BVTC’s work in ceramic rain screen and continued work in restoration demonstrates that terracotta is still a prominent material in general in the construction industry, the lack of new masonry construction projects was surprising. It is apparent from various discussions that the drive for the material comes from the designers and not the manufacturers. BVTC clearly has the capacity to supply terracotta for new large scale contemporary designs that use masonry installed terracotta. Boston Valley even makes a brochure available for download on their website that contains almost all of the extrusion dies they have utilised on past projects which can be used by designers for new masonry construction. Examples such as 520 West Chelsea and 200 Eleventh, both Annabelle Selldorf designed New York City residences which utilised product from Boston Valley Terra Cotta, demonstrate the fact that terra cotta still has a place in the new construction masonry market. 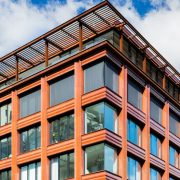 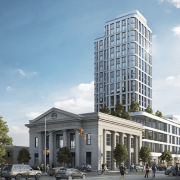 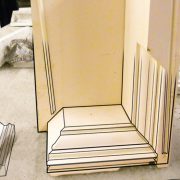 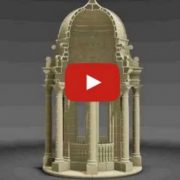 NYC’s The Fitzroy Shines in Video From JDS Development Group 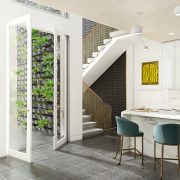 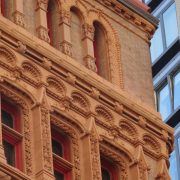 Masters of Recasting the Past
Scroll to top